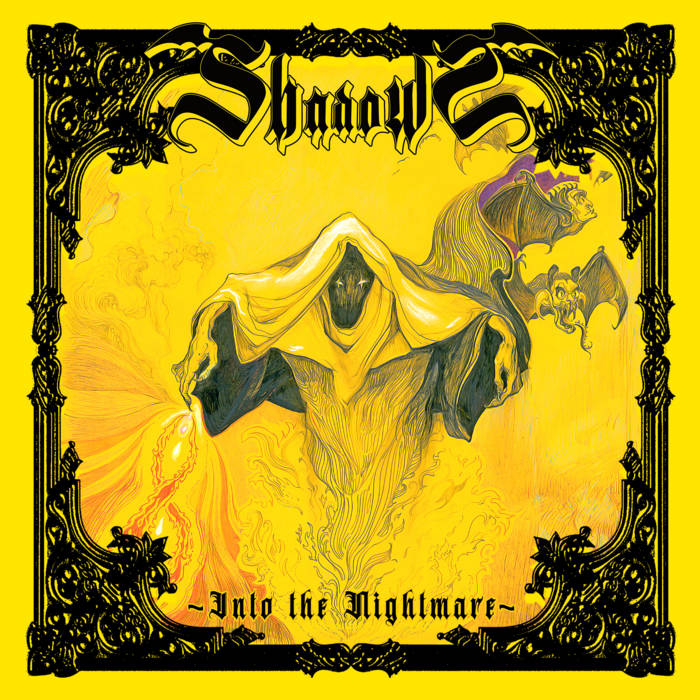 Barnie Mac Had me at guitar-centric+south american.

SRUIN187
Another gem of pure fury and marvelous evocative power forged deep into the unrivaled steel forge of the South American heavy metal underground, this time comes in shape of mysterious chilean one-man heavy metal wonder Shadows and its triumphant debut demo "Into the Nightmare", brought to you as an exclusive limited edition cassette reissue with brand new and redesigned artwork for the western/northern audiences, after an original and now sold out tape release surfaced in Chile in 2021 via the band's own Bandcamp and imprint Cabalist Records. Influenced by legendary acts like Alice Cooper, Judas Priest, Mercyful Fate and King Diamond, Shadows' debut demo delivers the fire and intensity that every true heavy metal fan will never want to stop hearing; one of searing leads, fire-breathing riffs, unforgettable hooks, and adrenaline-pumping intensity. These three tracks (plus one interlude) contained in the "Into the Nightmare" demo tape introduce us an act at the top of its game and in the throes of unseen and transformative realms of inspiration, as they astonishingly reinvent the metal wheel (and the steel) once again. In a time and place where we all thought we'd heard and seen it all before, this demo serves as a staggering reminder of how and why heavy metal is such an eternal force, how alive and vigorous the heavy metal flame is throughout the world, and of how much it still has to say and give to its devoted fans worldwide. From the opening riff of "The Ripper", to the closing doom-laden crescendo of the title track, everything about the "Into the Nightmare" demo celebrates, re-imagines, glorifies and eternalizes the immortal and undying flame of heavy metal, putting on display such a wide array of tricks, inventive and songwriting excellence to have effortlessly opened the gates to a higher order of its expression and adding a new perspective and dimension to the genre in a mere twelve minutes and fifty seven seconds of unrivaled riff dominance and heavy metal mastery. The occult/esoteric atmospheres, the subtle yet clever use of organs and keys, the spirited sinister vocals, and the gothic, gloomy vibes just serve as a majestic and timeless script to a blazing guitar centerpiece which throughout the demo's short but unforgettable duration appears to dwell on a higher level of flawlessness, brining us one of the most guitar-centric and riff-oriented heavy metal jewels the South American underground has gifted us in ages. Yet this, is nothing but the beginning...