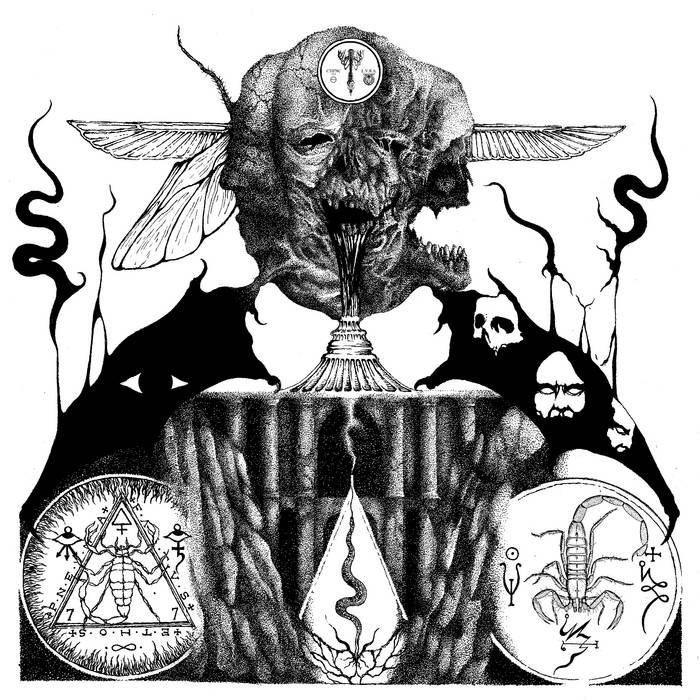 SRUIN092
On their horrific debut 2xLP "Typhomanteia: Sacred Triarchy of Spiritual Putrefaction", Venezuelan blackened raw death-doom abomination Cthonica summon a slithering scourge of pestilent and blood-curdling extreme metal barbarism rarely before fathomed at a state this inhuman, repulsive, and horrific. Converging somewhere in the middle between the agonizing and pummeling doomed death metal of early Incantation and Immolation and the twisted and serpentine blackened chaos of bands like Beherit, Blasphemy, and Portal, Cthonica have then crawled beyond their influences and any threshold of familiarity by adding layers of decaying noise and sepulchral dark ambient to their abhorrent extreme metal creation, as well as subduing to deranged religious and occult philosophical notions to transcend into the quintessence embodiment of all ritualistic aural abominations. The conceptual alchemies along with the decomposing atmospheric mantras added to their pummeling raw black/death framework have yielded a lengthening of their compositions, causing the music to stretch into a wretched dimension of perverted immateriality. Thorough this abject creation process Cthonica have thus harnessed an absurd realm of sonic disfigurement, where extreme metal is deformed into morbid occult practices and begins to embody deviant liturgic and ritualistic traits, taking the glorification and worship of death and perversion to an entire new realm of conceptual and audial atrocity.

Within this abominable work, in their own words, conceptually and lyrically Cthonica aim “to submit to the darkness of unreasoning and to be servants of our unconscious, metaphorically and symbolically speaking and 'to return to earth', and thus, now in the 'home' of the chthonic gods“, so they created the “Cthonica" moniker for themselves, to create a symbiont between their native language and English; as well as to create their own mantra: "Claiming (the) Throne (of) Noxious Illuminative Catharsis“. "Typhomanteia: Sacred Triarchy of Spiritual Putrefaction” - its voice - is thus composed by three main tracks divided as acts, that represent three aspects or steps for what they call "Spiritual Putrefaction”, or "pneuma-morphosis into corruption”: "Act I: The Chalice" (Will: To drink from the cup of Sin), "Act II: The Lantern" (Light: To enlight the paths of Acherontic teachings…), and "Act III: The Verb" (To Dare: As the alchemical / magical principle, to point the sword high and spread the seeds of damnation). The rest of the tracks result from the continuation of the first ones, all in order to "serve as bringers of the leviathanic breath (and winds) of Typhon towards Tehom". The band further states that “in our research for a more frantic and deranged sound, we composed 'Typhomanteia' in a more 'strong' and stressing way, to expose the worst of us and to fulfill our own meta-alchemical system”.

All the recordings were executed by the band themsleves alone between late 2017 and early 2018. The mixing and mastering was done by Hermit ov Tehom (Necrosound Studios) from Precaria (Mexico), who also contributes vocals to the fourth track of “Typhomanteia”.